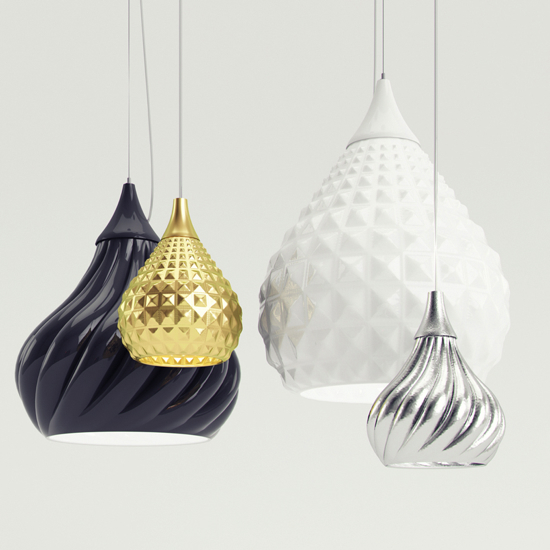 ‘Ruskii’ and ‘Ruskii Twist’ are two suspension lamps designed by Italy based designer Enrico Zanolla for Toronto based company VISO, presented during the light+building 2012 in Frankfurt. The lamps are […] ‘Ruskii’ and ‘Ruskii Twist’ are two suspension lamps designed by Italy based designer Enrico Zanolla for Toronto based company VISO, presented during the light+building 2012 in Frankfurt. The lamps are produced entirely in ceramic, both available in white or black glazing, silver or gold metallic. “This project is a tribute to the beauty and uniqueness of the St. Basil cathedral in Moscow. During my stay in Russia I spent time observing and studying the constructive system of the domes. The difference in colour and size comes from symbolic meanings assigned to every single dome. A great attention has been paid to details and quality of realized domes, and everything was made without using a 3d cad. So these charming domes became a challenge and a strong idea to convert them in lamps, mainly because they were designed like candle flames symbolizing that every man is “the light of the world”.
The final suspension lamps are characterized by dynamic shapes, reflecting the movement of a candle and at the same time containing the modular constructive system used in the original domes.” – Enrico Zanolla Both lamps will be available by the end of may, in the 37.5cm and 18cm diameter sizes.