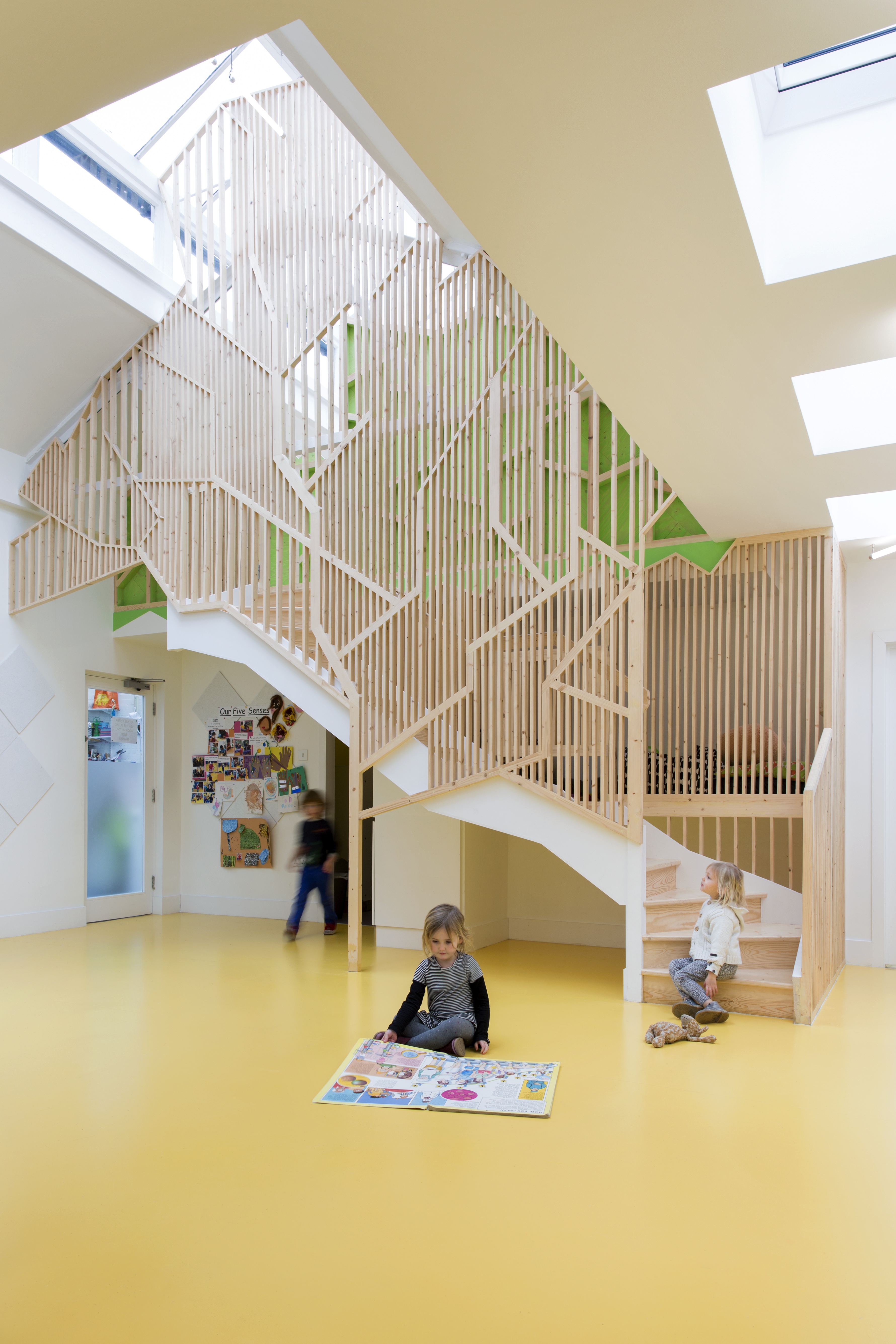 Have you ever been fascinated by the idea of being shipwrecked on a desert island and starting a brand new life, learning how to use the land for one’s needs? Johann David Wyss took inspiration from one of the most well-known British writers, Daniel Defoe, to imagine a Swiss family cast away on an island. In fact this was a little quote from The Swiss Family Robinson.
Now, why are we talking about novels when we have to talk about an architectural project?
Let’s take a step back.
Here we are in North London, Dalston to be precise. An amazing part of the city, well-known for its vibrant community, fast developing design scene and, let’s say it… amazing Turkish restaurants and jazz clubs. In the Shackwell area there is a former public washing baths decorated with red bricks and Portland stone which hosts a lovely environment for kids, “ordinary little things”. Lipton Plant Architects, the highly creative London architecture studio was asked to do something of universal appeal for this place: make it fun (for the kids), cool (for the look) and functional (for the building). If we want to be more precise, the main goal was to “ design and upgrade the Bath House building to increase the internal space, improve access to the outdoor area, and create imaginative play spaces for young children“, according to the Founder, Manager and Project Manager, Maggie Norwood. Here is when the idea of Robinson’s father and his treehouse were called to action. This is the heart of the inspiration process that led one of the most forward-thinking architecture practices in London. In fact, the architects designed a tree which embraces the stairs and its levels up to the top. A tree which takes kids by hand to foster creativity, courage, adventure, protection and growth.

As Ed Lipton, architect of this project explains “the design wrapped an otherwise off-the-shelf stair, exaggerating the necessity for containment on the stair by extending the pine balustrading from the floor to ceiling. The rhythm and spacing of the balustrading offered wonderful possibilities for spatial illusion, volume, transparency and layering. As one moves through the space, glimpses of green on the other side of the stair are revealed through the latticing, as though the tree has been ‘coloured in’, creating the illusion of movement and of foliage. Branching out from a central single stem, the result face-on is delicate and angular, a ‘cut-out’ graphic silhouette of a tree“. Well, our reaction to this could be sum up in two words: simply | amazing.
White bricks and vivid colours externally together with a bright yellow rubber carpet running from inside to outside make the atmosphere even more joyful.
It is not New Guinea, but just North London. Beauty, functionality and design run together on the same wavelength.
No wonder that the project has just been nominated for the prestigious RIBA annual awards, to be celebrate next Tuesday 3rd of May.
Excitement in Lipton Plant Architects is all around their studio during these days not only for the prestigious nomination but also because they are really proud to show up projects where architecture and design help people to live better.
And, it goes without saying, we do support them and will keep an eye on their next project.