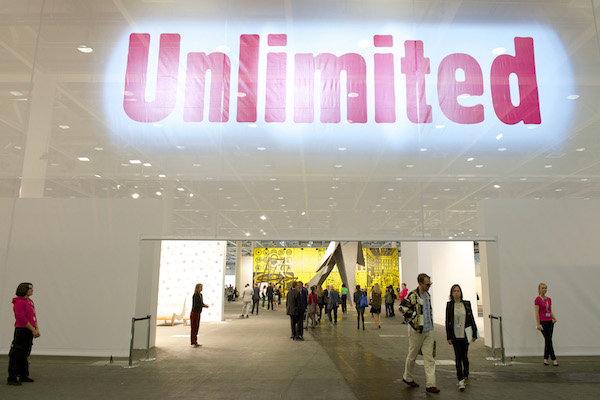 Since first being introduced at Art Basel in 2000, Unlimited has provided galleries with an opportunity to showcase large-scale sculptures, video projections, installations, wall paintings, photographic series and performance art […]

Since first being introduced at Art Basel in 2000, Unlimited has provided galleries with an opportunity to showcase large-scale sculptures, video projections, installations, wall paintings, photographic series and performance art which cannot be displayed within the limitations of an art fair stand. The sector will take over the exhibition space in Hall 1 as Statements, the sector for younger galleries, moves into Hall 2. Highlights of Unlimited will include Carl Andre’s floor work ‘Steel Peneplain’ (1982) presented by Konrad Fischer Galerie (Dusseldorf), which consists of 300 steel plates and was created especially for Kassel’s Documenta 7 in 1982. Hanne Darboven’s historically significant work ‘Kinder Dieser Welt / Children of the World’ (1990-1996) was developed in the aftermath of the fall of the Berlin Wall. Presented by Konrad Fischer Galerie (Dusseldorf) and Sprüth Magers Berlin London (Berlin, London), the work has been exhibited only once before, in Stuttgart in 1997. Tucci Russo Studio per l’Arte Contemporanea (Turin) will present ‘Matrice di linfa’ (2008), part of Giuseppe Penone’s ‘Trees’ series of works, in which the center of a fir tree is removed.