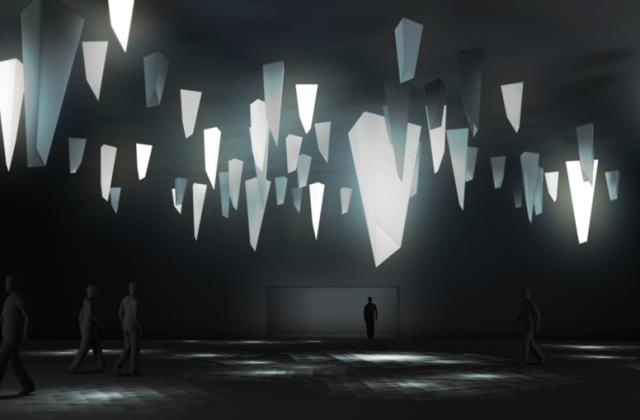 Every June, Design Miami/ Basel commissions a monumental work by an early-career architect or designer offering a platform for experimentation and engagement with an international audience. The Design Commissions are […] Suspended from the ceiling of the entrance hall of the Herzog & De Meurondesigned Basel Exhibition Centre, the forms that make up Jamie Zigelbaum’s Triangular Series resemble highly evolved stalactites, blurring the boundary between life and not-life. Pulsing with light and responding with a unique sensitivity to the people sharing the space with them, 59 large, suspended tetrahedra of varying sizes will be scattered throughout the space to create an all-encompassing, immersive environment for visitors as they arrive and depart the fair.

Constructed from translucent acrylic, the refined forms of Triangular Series are the outer shells of a highly sophisticated interactive system. The heart of each form is a synthesis of custom electronics, including high-power LEDs, advanced sensors and software that allows each form to communicate with both individuals in the space, as well as each other. Each form has a luminous respiratory system, a gentle rhythm of illumination that is uniquely its own.

As visitors approach each object, their respiration changes and the forms react. The tetrahedrals also communicate with each other, synchronizing rhythms of illumination through an invisible, digitallymediated dialogue. While each form is itself an individual, synthetic organism, together they act as one — an emergent presence that transcends each’s individuality.

“For me, the process of creation is about understanding,” says
Zigelbaum. “I hope that the process of understanding the world around us is
translated through the work. I’m interested in using technology to explain harder-tocommunicate
ideas; in Triangular Series it is to create a dialogue between organic
and inorganic entities.” Conceived as rather alien beings in the space, the forms in
the series are designed to be beautiful, crystalline, sensate objects, but not
necessarily comforting ones.

One thought on “Jamie Zigelbaum for Design Miami/ Basel 2014”