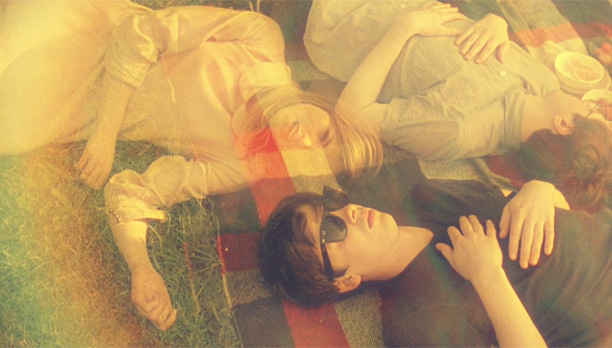 The dreamy atmophere of Still Corners

On tour. On the way to Chicago from Toronto in a very rainy day , Greg Hughes from Still Corners, luckly found time to tell Polkadot about Creatures of an […] On tour. On the way to Chicago from Toronto in a very rainy day , Greg Hughes from Still Corners, luckly found time to tell Polkadot about Creatures of an Hour, their first LP surely marked by the downy voice of his musical partner Tessa Murray.

Let’s start with simple questions: Tell Polkadot readers who are you and how does the name “Still Corners” come from?
I’m Greg from Still Corners. When I started the band I was looking for a name and a lot of the music I was writing was inspired by nature. I was also reading a lot of Robert Frost at the time. I came across the words “Still Corners” in his poem “New Hampshire” and fell in love with it instantly. I thought the name summed up the sound of the band very well.

Creatures of an Hour is your first LP. 33 minutes to create a dreamy and dark atmophere. What creatures were you imaging when writing and recording this album?
A lot of this music was written at night when the city quiets down and becomes peaceful for a while. I thought the title from Keats captured this feeling and vibe of nocturnal song writing.

What were your inspiration for your LP?
It was mostly inspired from a bad break up I went though. A lot of the songs deal with love and pain.

Imaging a movie suitable for the atmoshere of your album, what movie would you it be?
Rosmary’s Baby combined with the Wonder Years. I read that the song Endless Summer refers to your illusion of never-ending sun in London, is it right? How will it be London with an Endless Summer?
I moved to London from Austin about 10 years ago and missed the long summers you get in Texas. I wrote the song as a wish for the summer in England to last a bit longer but it’s also about wanting to capture fleeting moments that slip through your fingers.

Listening to Creature of an Hour, I image the character of a shaman, ready to preserve tradition. If you were a shaman, what would you preserve?
I would preserve gentility, romance, beautiful architecture, and family run grocery stores.

What was the first song you fell in love with?
Wave of Mutilation UK version by the Pixies.

I suppose you live in London, how’s the music scene out there?
It’s a big city so it’s spread out but there’s some wonderful music and people there. Stoke Newington in particular has a good vibe and places to see music.

Take your time, close your eyes and listen to Still Corners.