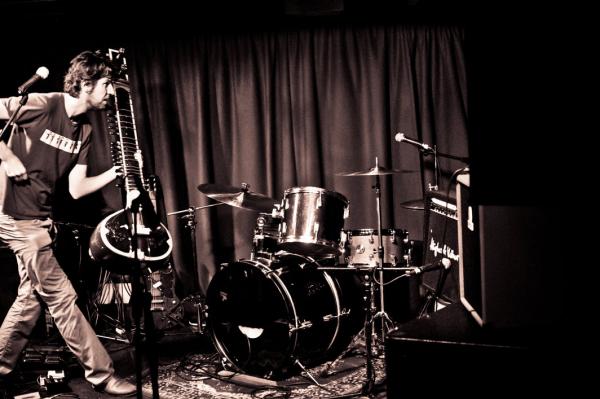 Image a lovely chap from Cork who is trapped in the role of a science teacher but would leave his job to do what he really wants to do, writing […] Image a lovely chap from Cork who is trapped in the role of a science teacher but would leave his job to do what he really wants to do, writing and playing music. Carpool Conversation started a couple of years ago in Ireland from the brainful Brian O’ Reilly. After moving to London with all his recordings he did in his own country, Brian gave shape to the original project and meaning of band: a kind of rainbow, colourful music made of the sum of different people influences. Now the four-piece band is outfit with Brian on guitar , sitar and vocals , Christos on drums and vocals , Joao on bass and Martin on guitar and keys.
On a rainy Olympic day in London and a melting day in the south of Italy, we had a nice chat with Brian.

So Brian, can you speak a bit Italian?
Well…. “Ciao Bella” and that’s it!

What’s the story behind this band name?
I was working on a very big project in Cork and there was a bridge which overpasseed the whole city and I realised that it was full of cars which created traffic, no one person. And I thought: “ Why nobody is sharing to avoid traffic?!”. Unlucky, carpool is not that used in Ireland. But the atmosphere which this situation creates, forces you to talk and produce something. I mean in the current line there’s a Brazilian guy who plays bass, an English guy at the guitar and then me! Six songs of the album were co-written with a friend of Brian and recorded in the little studio I set up in my house. That’s the whole point!

I listened to your album and you can feel different sounds: pop, funk, a bit of psychedelia as well, what were your influences when writing it?
Well, actually I don’t listen to a sound and think that I’d like to do like it, sometimes it just comes out without thinking of it. Even if I have to say that I have been influenced by Pink Floyd, Beatles, the Stones and I really love blues. But also, AIR, Bob Dylan, Radiohead. Actually you can hear a bit and pieces of all them in my songs. Everything is also a step forward.

From Ireland to London, what’s the most inspiring things you have found?
Well, London is a city that hasn’t age. It has good and bad sides very intertwined that have a certain amount of harmony and it works. Plus you never know what’s around the corner and I love that. Diversity, multiculturalism, situations like when I’m in the park with my guitar, people just come to me and talk. I love that.

This is your debut album and he’s coming out late in August, how do you feel?
I’m super excited! There are lots of things happening at the moment. There are 3 gigs happening and people ask us to play. It’s really starting to open up.

How hard is to be a musician nowadays?
Oh good question! Well in London is pretty challenging in terms of space, time and stuff like that. I would drop everything to be a musician full time! What I am trying to do now is to push myself a little but more on songs and melodies. And I love the fact of writing lyrics which brings listeners to different interpretation and are playful and clever.

Any plans for the launch of the album?
Well, a brand new video of Memory Wave is being launched and was directed by and Italian girl called Sofia Rocca. We are rehearsing for going live.

Ok..last questions: if you had to choose a band to play a song with, what would you choose?
Grizzly Bear and Thom Yorke.

And… what’s on your ipod? What are you listening at the moment?
Stealing Sheep, Robert Wyatt, Radio Head, Nick Drake.