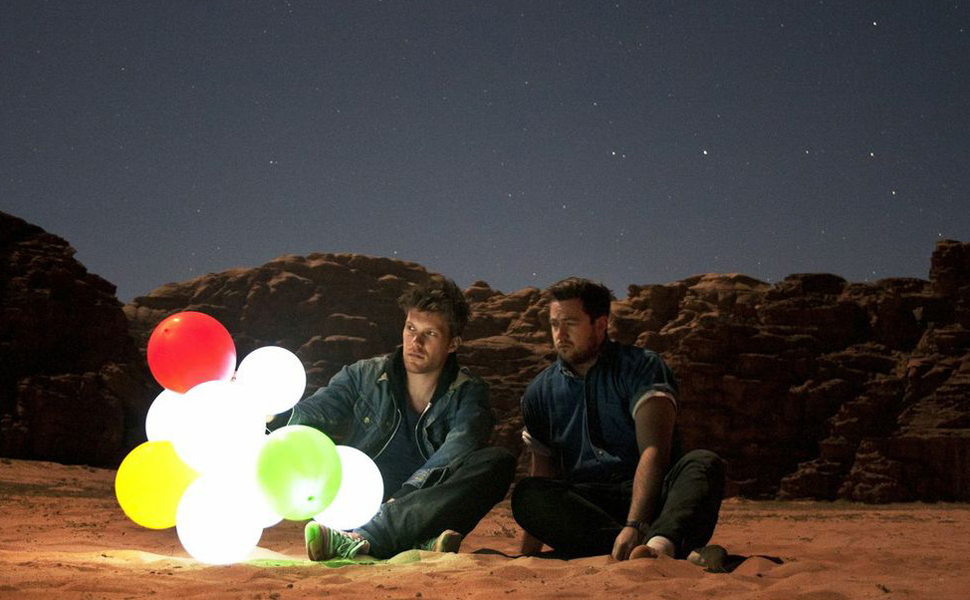 Technicolor drum troupes in the red corner, full-throated angel hosts in the blue. FIGHT. That’s how the English duo THUMPERS describes the soul of the band. Hello guys, first of […] Technicolor drum troupes in the red corner, full-throated angel hosts in the blue. FIGHT. That’s how the English duo THUMPERS describes the soul of the band.

Hello guys, first of all how did this brand new year started?
…With intense rehearsals.. We have 5 songs from our album that we’ve never played live before to get ready and for some reason we kept all the hardest til last so now it’s time to shine. It’s a joy to be able to think about playing longer sets that could include these different songs from now on.

I can’t avoid the question… where does your band name come from?
Layered drums are the lifeblood of THUMPERS so we chose the name to suit that but it’s also a good word for hinting at the big-hearted / heart-swelling nature of the songs we play. they aim for an emotional impact.

“Galore” and before “Unkinder (a tougher love)” have been broadcasted a lot, how do you feel?
It’s always a big compliment to be played on radio – that part should be true for everyone in a band. For us, though, that feeling is heightened since we produced all of our songs ourselves at home – that journey from bedroom to airwaves is even more direct. So we enjoy it a lot, there’s always that excitement at knowing how far the songs have come. With “Galore” in particular, we finished the recording on a wednesday at the start of january and it was on the radio by the following monday.

Your album will be released very soon, how did the recording go and is there anything interesting that happened?
We recorded the album over the course of 6 or 7 trips back to our hometown and those sessions were INTENSE. There really was no room for preciousness and that’s something that we were keen to keep up. The songs are meant to be celebratory and spontaneous-feeling so it was important to reflect that when recording. we broke drumsticks, found some messed up piano sounds, talked about sega mega drive games influences and just included everything that was around us to take the recordings into this immersive world.

I read on a interview that Thumpers was not supposed to be a a indie band, it’s a project that can do lots of different things. So are you up to anything interesting right now?
We definitely came into this with the aim to be more than a project with a set line-up like traditional bands, yeah. We wanted to actively stretch ourselves in terms of songwriting and production and one of the best ways to do that is by collaborating with other artists. So we worked with GAGGLE last year on a cover of Björk’s ‘Innocence’ which was great and were lucky enough to get Summer Camp to record some guest vocals on the album itself too. That ambition to explore new ways of working – and not just follow any set patterns of creativity – is really important to us.

You were playing live with Friendly Fires…
Being involved with playing live with Friendly Fires was inspiring on a couple of levels. Firstly, they have made such great music by producing themselves and that was definitely a factor in our decision to take charge of that for ourselves. and secondly, the carnival-like atmosphere that they create for their own shows is such a deviation from that of more conventionally “indie” bands. There’s such a feeling of inclusion in being in a crowd at one of their shows and that’s due to a real generosity in the music and performance. You can pick out people singing to each other in the crowd at any given time and that’s something we’d love to be able to see from our stage too.

Is there any collaborations you would like to do now?
We’re real subscribers to the “make announcements online and they will come true” ethos, ha. So in the spirit of that we’re gonna aim BIG – Jessie Ware, Kanye West, St Vincent & Jon Hopkins please…

What’s the perfect or ideal atmophere/place to listen to your music?
We both spent our formative musical years driving round the country yelling along to the bands that we loved – Weezer, the Pixies – and would love to think that we could be that band to someone else. There’s something really tailormade in that environment for turning a song you just liked before into a personal anthem.

If you ever been to Italy, where would you like to play?
In my touring with Friendly Fires, you visit all these amazing places, but I made sure that whenever I went somewhere, like the Colosseum in Rome for example, I’d wouldn’t fully experience it in one go, just marvel from outside this time, next time go up to the gates.. always leave something to come back for.. kind of a good way to live I think, and the opposite of this annoying 21st century trait to “check things off” or have bucket lists.. WRONG!
Marcus stayed near Milan on a school trip but didn’t get to see the city properly so that’s probably top of the list for now but we just hope we can get to see as much as possible. ah, so many places thumpers haven’t been to in italy. we can’t wait to come visit.

Hope to see you soon guys.